We are now accepting order/reservations
for our April-May-June 2020 Season.

Miscanthus (Miscanthus X Giganteus) is a "woody" perenial grass of Asian descent, that when established, will grow about 111/2' yearly. This grass is sterile triploid (three sets of chromosomes) formed by a natural cross of miscanthus sacchariflorus and miscanthus sinensis. It produces new shoots (stalks) annually which average 3/8" in diameter, with 4" average cluster spread. Because it is sterile it is propagated by rhizome division. The crop is established by planting pieces of the root (rhizomes), which are cut to about 4" in length. The cold hardy grass grows rapidly (C4 photosynthesis), has low nutrient requirements, has few pests or diseases and produces high yields. Miscanthus Giganteous is a non-invasive grass that can be controlled because it has no viable seeds and runners underground. 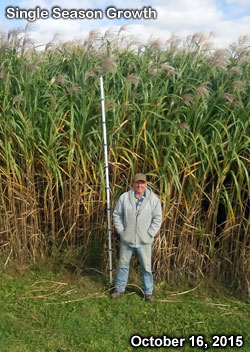 Miscanthus' photosynthetic mechanism appears to be better adapted to low temperatures than that of many other C4 crops, equipping it for high productivity under relatively cool temperatures. At full maturity it can yield up to 12 tons of dry material per acre (about fourth year on). There are higher yields being reported yearly. It shows great potential as a biomass crop. As with other bio-energy crops, the harvested dry stems may be used as fuel for heat, electricity or converted to ethanol.

The rhizomes are planted about 4" deep, horizontally into a well prepared seed bed in the spring as soon as soil is workable. A little deeper if the soil moisture level is low. Europe has been working miscanthus for over ten years. They plant at one plant per square meter for establishment. Here in the U.S. we are planting at one rhizome per square yard - three foot plant spacing in rows 3' apart. That rate would require approximately 4,850 plants per acre. Row layout and density is up to the grower based upon a field planted to be lifted in two years (denser) or for establishment. Also, a field planted to match equipment already owned for cultivation could change row width and spacing. Good yields can be achieved on a wide range of soils but the key to high tonnage is moisture supply. A wide range of PH is tolerated but growth is best between 5.5 and 7.5 PH. Sandy or free draining soils only yield well if rainfall is adequate so should be avoided if possible.

This is a crop that will produce for 15-p